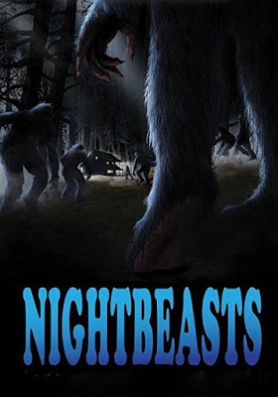 This honest review is based on a free screener provided by the production company.

Okay, so here we have a deadbeat dad, Charles (Zach Galligan) taking his son to the country for a weekend of hunting, only to find that the local Indian reservation has been menaced by a tribe of Sasquatch (Bigfoot to you and me.) Zach plays his character dead straight, ably backed up by a cute-as-button son who looks absolutely nothing like him. There’s a backstory which could have been developed a bit more, which might have bound the movie together more securely, and avoided some of the “what the hell?” moments.
The upshot is, this movie is a lot of fun, provided you don’t expect great things in regards to budget, special affects and acting ability from most of the cast. Put simply, if a guy wants to watch a horror film and then get laid, but his girlfriend isn’t keen on watching a scary movie, this is the one to watch. Chances are, fellas, you will get lucky by the time the credits roll.
So first, the Not So Great Bits.
1. This is an independently made movie with a limited budget, so the special effects were never going to be brilliant. The Bigfoots, in the tradition of most movie monsters, aren’t half as scary when you see them up close. They look like a hybrid of the Cookie Monster and a really pissed-off fluffy slipper. Or blokes in monster suits running around with fake blood dripping from their mouths….
2. And the acting. The support cast were uneven at best. Perhaps the producers hired some locals and put scripts in their hands. If so, great, but they weren’t very well rehearsed. It could have been crisped up A LOT. Stand outs were Zach Galligan (Gremlins luminary), Audra Sky (also playing it dead straight) and Donn Angelos as the Sheriff, for unintentional comedic value.
3. The emotions were OTT at times (“why Clarence? WHY! OH GOD WHY!!!” Before going back to normal, as if the evisceration of a close colleague had been completely forgotten about.
4. The iffy Indian “entertainment evening” and hoky “we understand the land but the white man doesn’t, which is why the Bigfoot are coming after you and not us.” Hmmm.
5. Most of the juicy gory action happens off-camera, with a lot of agonised screaming. There wasn’t enough shock and awe.
The Good Bits!
1. The music, very well used and genuinely creepy.
2. Some clever camera shots, well-known in horror films, panning up or down stairs, and placing characters in front of windows, just waiting for shadows to appear behind them…
3. The comedy moments. Unintentional or otherwise, including the anally retentive deputy, obsessed with having a poo, and the cat obviously tossed from off-camera onto a character’s lap, to provide a scare.
4. The relationship between Zach’s character and his son, which was great and didn’t fall into the “angsty teenager and dad finally reuniting” trope.
5. The unpredictability of the plot. People didn’t die when I expected them to, and sometimes not at all.
There’s a lot of affection for this film, and rightly so. Everyone in it seems to be having a jolly old time, hammy acting and all. If someone invited me for an evening of popcorn, beer and watching Nightbeasts, I’d be very happy. It doesn’t take itself two seriously, which is why I have given it an extra star. This deserves to be a cult classic, with people dressing up as characters from the film and shouting at the characters. “Don’t go in the woods, Clarence!” Or, “watch out for the pussy!” Or just “aaarrrrgghhh!” Yep, it would work. I’d go as the slutty mom. “What is going ON here? Goddammit!” Kind of sums up the movie…